The Disney PIXAR Monster crew is back in Monsters University this scary and fun tale of Mike Wazowski (voice of Billy Crystal) and James P. Sullivan, “Sulley” (John Goodman) before their Scaring careers.

This is their story of how they met at Monsters University, MU. They met but right away during their first semester at MU, Mike is taken off course after he meets Sully. They instantly become competitive friends who’s antics and out-of-control behavior gets them kicked out of the elite Scare Program.

To make things right, Mike and Sulley team up with a bunch of misfit monsters with which they have to cooperate and work with to get themselves out of the trouble they began. This is a great story of how growing up and becoming an adult helps one discover some things while growing up.

And of course all sets include some great bonus materials. Some of the short clips include Campus Life, Story School, Scare Games, Music Appreciation, Color and Lighting, Deleted Scenes, a short film “The Blue Umbrella,” and more!

Check out this great video of a Mike Wazowski Pumpkin being carved in a time lapse video. Try it out yourself! 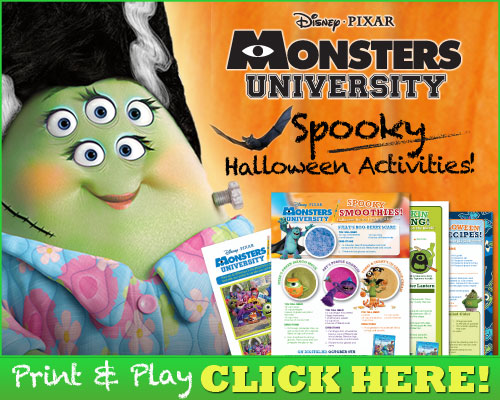