Set in the rugged and mysterious Highlands of Scotland, Disney Pixar’s Brave follows the heroic journey of Merida (voice of Kelly Macdonald), a skilled archer and headstrong daughter of King Fergus (voice of Billy Connolly) and Queen Elinor (voice of Emma Thompson). Determined to change her fate, Merida defies an age-old custom sacred to the unruly and uproarious lords of the land: massive Lord MacGuffin (voice of Kevin McKidd), surly Lord Macintosh (voice of Craig Ferguson) and cantankerous Lord Dingwall (voice of Robbie Coltrane), unleashing chaos in the kingdom. When she turns to an eccentric Witch (voice of Julie Walters), she is granted an ill-fated wish and the ensuing peril forces Merida to harness all of her resources including her mischievous triplet brothers to undo a beastly curse and discover the meaning of true bravery.

This Christmas girls everywhere are going to want this movie. My girls received a copy to review and we had a great time watching it in 3D!!! I have to say Disney 3D is my favorite, there’s nothing like the quality.

Just check out these clips: 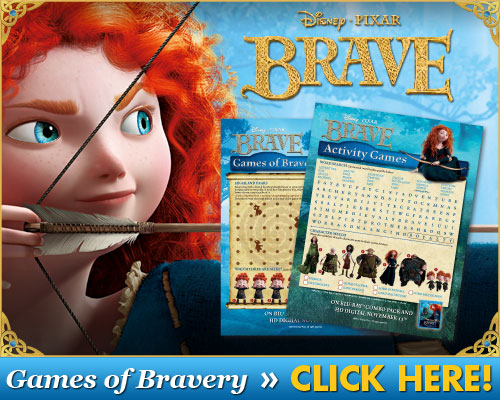 Hi, I'm Kristin a now single mom of three. Our Ordinary Life is a family lifestyle site that started in 2006.